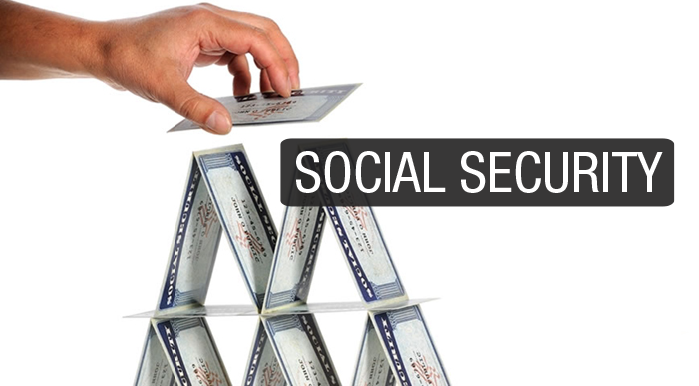 Politicians in Washington are stealing your future.

Every year, they take 12.4% of your income to prop up their failed Social Security system – a system that is heading toward bankruptcy.

If you are an American earning the median income of $31,695 per year, and were given the option of investing that same amount of money in a stock mutual fund, you would retire a millionaire – without winning the lottery or a TV game show. That million dollars would provide you with a retirement income of over $100,000 per year – about five times what you could expect from Social Security. Even a very conservative investment strategy would yield three times the benefits promised by Social Security.

Libertarians Want You to Control Your Own Money & Future!

Libertarians believe you should be able to opt out of Social Security and invest your money in your own personal retirement account. An account that you own and control – one that politicians can’t get their hands on.

Republicans and Democrats say it can’t be done – that your Social Security taxes are needed to pay benefits to today’s retirees. Instead of letting you invest in your own future, they want you to have faith that someone else will pay your benefits when it comes time for you to retire. Although most won’t admit it publicly, their “solutions” to the Social Security crises all come down to some combination of tax increases and benefit cuts.

Countries like Chile, Mexico, Britain, and Australia have successfully made the transition from their failed Social Security systems to healthy systems based on individual retirement accounts. In Chile, over 90% of workers have opted out of the government-run system. It’s time America did as well.

The federal government owns assets worth trillions of dollars – assets that it simply doesn’t need to perform its Constitutional functions. By selling those assets over time, we can keep the promises that were made to today’s retirees, and to those nearing retirement, while freeing the rest of America from a failed Social Security system.

Libertarians will introduce and support legislation to give you that choice, and put you in control of your own retirement future.