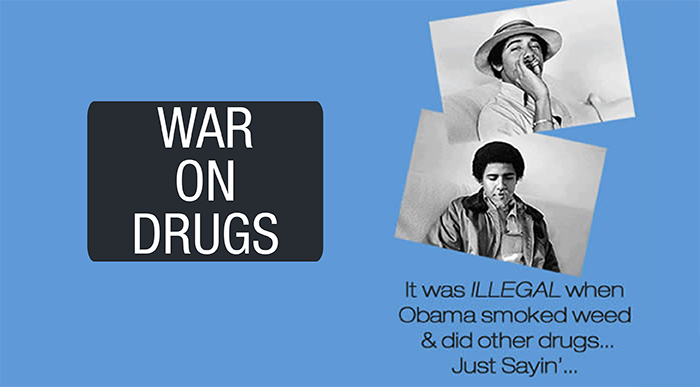 What right could be more basic, more inherent in human nature, than the right to choose what substances to put in one’s own body? Whether we’re talking about alcohol, tobacco, herbal cures, saturated fat, or marijuana, this is a decision that should be made by the individual, not the government.

Drug-related crime (which is over 85% of all crime) is caused not by drugs but by drug laws that make it expensive and a monopoly of criminals. This stance isn’t “approving” of drugs; it’s just realism, prohibition doesn’t work. In addition to the significant financial strain, the worst hazard of the drug war may be the expansion of police powers through asset forfeiture laws, “no-knock” warrants and other “anti-drug” measures. These tactics can’t stop the drug trade, but they are making a mockery of our supposed Constitutional freedoms.

Over a million and a half Americans were arrested last year on drug charges, and nearly 40% of those arrests were for marijuana possession alone. Does this make sense?

A recent Gallup poll reports that 58% of Americans now agree that marijuana should be legalized, a dramatic increase in support that reflects Americans’ increased knowledge and understanding of the issue. Proposals to regulate marijuana similarly to alcohol have been considered in several states, and the Libertarian Party has supported those efforts; Libertarians believes the federal government should end its prohibition mandate and allow each state to pursue its own desired policy.

Before we can get serious about reducing the harms associated with drugs, we have to accept that there will never be a drug-free society. The 2012 Libertarian Presidential Candidate, Governor Gary Johnson said “it will never be legal for a person to smoke marijuana, become impaired, and get behind the wheel of a car or otherwise do harm to others, and it will never be legal for kids to smoke marijuana. But we have to understand that marijuana is our nation’s #1 cash crop despite the prohibition; it will always be available to those who really wish to use it.”

When polled, high school kids say marijuana is easier to get than alcohol. Is this perhaps because they buy from black market dealers who do not ask for ID? Legalization of marijuana would instantly and dramatically improve conditions on our southern border. Marijuana is Mexico’s #1 illegal export; legalizing it would result in dramatically reducing the power and wealth of the drug lords, and instantly helping to restore stability in a nation whose stability and sustainability is truly vital to our economic and national security interests. If we truly wish to reduce border violence, take the profit out of it.

To create a drug-free society, we’d have to build a police apparatus so intrusive that all Americans would have to be under surveillance 24 hours a day… presumably for their own good. Should citizens of the “land of the free” ever stand for that? Abuse of hard drugs is a health problem that should be dealt with by health experts, not a problem that should be clogging up our courts, jails, and prisons with addicts. Instead of continuing to arrest and incarcerate drug users, we should seriously consider the examples of countries such as Portugal, the Netherlands, and Uganda, and we should ultimately choose to adopt policies which aim to reduce death, disease, violence, and crime associated with dangerous drugs. Honest, effective education will be key to succeeding with this transition. America has cut teen cigarette use in half, not by criminalizing possession and use, but through a combination of honest education and sensible regulation. We can never totally eliminate drug addiction and drug abuse. We can, however, minimize these harms and reduce the negative effects they have on society by making sure drug abusers are able to access effective treatment options (jail is not an effective treatment option).

Lastly, Libertarians believe the government should not be able to tell us what we can and cannot put into our body.

What You Should Know About Drug Prohibition

Why Are So Many Violent Criminals Walking Free?