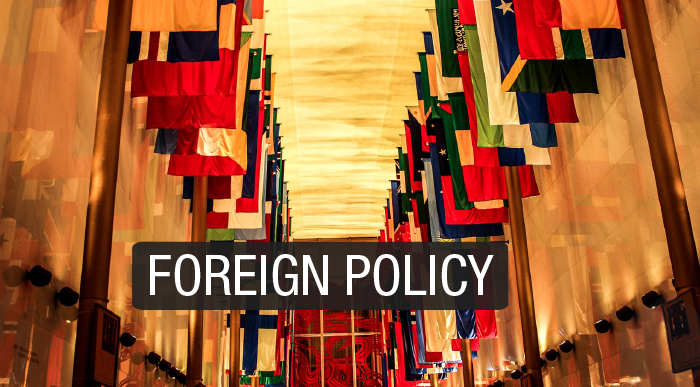 Stop nation-building and being the “policeman of the world.” Peace through trade and diplomacy.

In his first inaugural address, President Thomas Jefferson cited the essence of a libertarian foreign policy, “Peace, commerce, and honest friendship with all nations – entangling alliances with none.” This echoed the advice of President George Washington that “the great rule of conduct for us in regard to foreign nations is, in extending our commercial relations, to have with them as little political connection as possible.”

The twin pillars of a sane foreign policy are:

Whatever motivates this enormous budget, it is certainly not for the defense of American soil. Indeed, when the Department of Homeland Security was created, this was a virtual admission that the Department of Defense had goals other than homeland security. No foreign army has the slightest capacity to invade the United States, and as North Korea has demonstrated, even the possession of a single nuclear weapon is enough to deter invasion.

The best form of anti-terrorism insurance is to remove all troops from the Middle East, stop attempts to either preserve or change their current governments, and end all government-to-government aid.

It is time for American troops to come home, not just from the Middle East but from Europe, the Pacific. At the same time, let’s drop all barriers to trade and travel and turn enemies into friends. Polls have long indicated that the rest of the world likes Americans far more than they like the US Government and admires America’s reputation as a land of opportunity and productivity. We have a great opportunity now to bring both peace and prosperity to our country and the world by restoring that reputation.