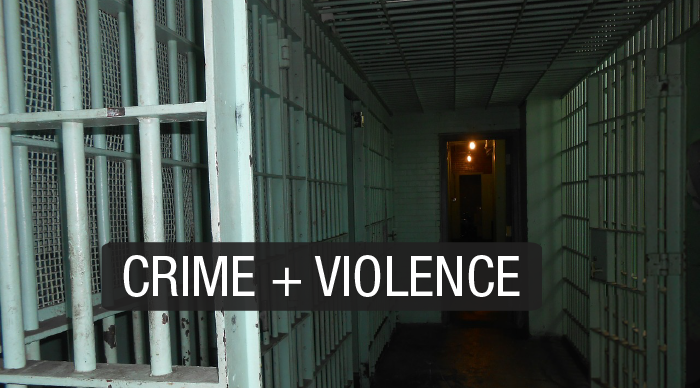 An approach to criminal justice and crime control that is smart, compassionate and tough. An approach that will make our streets safe again.

The Libertarian Party is the only party that addresses the issue of Crime at the basic fundamental level. The first step to fighting crime is to identify what a “crime” is. A “crime” is defined as the use of force, including fraud, against another individual or group. Without the description of “crime”, what you have are violations of someone’s idea of what you should be doing. The Libertarian Party is committed to reducing the “crime” rate by addressing only those acts that have a victim. In short if there is NO VICTIM, there is NO CRIME.

The Libertarian Party’s anti-crime plan would:

Protecting the rights and interests of victims should be the basis of our criminal justice system. Victims should have the right to be present, consulted and heard throughout the prosecution of their case.

In addition, Libertarians would do more than just punish criminals. We would also make them pay restitution to their victims for the damage they’ve caused, including property loss, medical costs, pain, and suffering. If you are the victim of a crime, the criminal should fully compensate you for your loss.

What’s more, drug prohibition also inflates the cost of drugs, leading users to steal to support their high priced habits. It is estimated that drug addicts commit 25% of all auto thefts, 40% of robberies and assaults, and 50% of burglaries and larcenies. Prohibition puts your property at risk. Finally, nearly one half of all police resources are devoted to stopping drug trafficking, instead of preventing violent crime. The bottom line? By ending drug prohibition Libertarians would double the resources available for crime prevention, and significantly reduce the number of violent criminals at work in your neighborhood.

Step 3. Get Tough on Real Crime

The Libertarian Party is the party of personal responsibility. We believe that anyone who harms another person should be held responsible for that action. By contrast, the Democrats and Republicans have created a system where criminals can get away with almost anything.

For instance: sentences seldom mean what they say. Fewer than one out of every four violent felons serves more than four years. Libertarians would dramatically reduce the number of these early releases by eliminating their root cause – prison over-crowding.

Since nearly six out of every ten federal prison inmates are there for non-violent drug-related offenses, it’s clear that drug prohibition is the primary source of this over-crowding. It has been estimated that every drug offender imprisoned results in the release of one violent criminal, who then commits an average of 40 robberies, 7 assaults, 110 burglaries and 25 auto thefts. Early release of violent criminals puts you and your family at risk. It must stop.

Step 4. Protect the Right to Self-Defense

We believe that the private ownership of firearms is part of the solution to America’s crime epidemic, not part of the problem. Evidence: law-abiding citizens in Florida have been able to carry concealed weapons since 1987. During that time, the murder rate in Florida has declined 21% while the national murder rate has increased 12%.

In addition, evidence shows that self-defense with guns is the safest response to violent crime. It results in fewer injuries to the defender (17.4% injury rate) than any other response, including not resisting at all (24.7% injury rate). Libertarians would repeal waiting periods, concealed carry laws, and other restrictions that make it difficult for victims to defend themselves, and end the prosecution of individuals for exercising their rights of self-defense.

Any society that lets kids grow up dependent on government welfare, attending government schools that fail to teach, and entering an economy where government policy has crushed opportunity, will be a society that breeds criminals. No permanent solution to crime will be found until we address these root causes of crime.

The Libertarian Party would increase employment opportunities by slashing taxes and government red tape. We would also end the welfare system with its culture of dependence and hopelessness. Most important of all, we would promote low-cost private alternatives to the failed government school system.

Why are so Many Violent Criminals Walking Free?