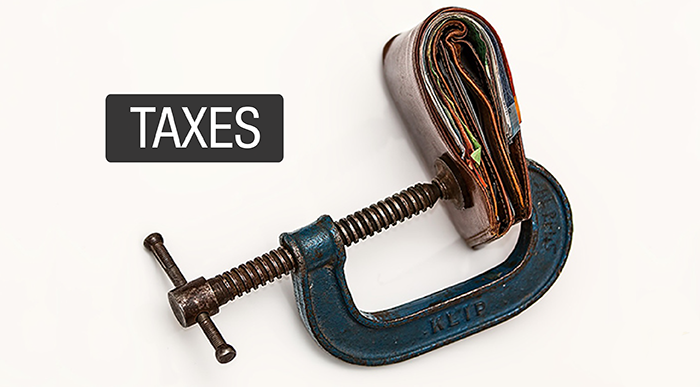 Respecting the fruits of your labor

How Can We Cut Taxes?

Instead of tending to the basics, government has grown into a bloated conglomerate of political services that gets larger every year — with no end in sight.

Politicians also run trains, bail out savings and loans, construct houses, sell insurance, print books, and build basketball courts — you name it! But the fact is, every service supplied by the government can be provided better and cheaper by private business.

All over the world, governments are busy selling airlines, power plants, housing, and factories to private owners. Where inefficient government bureaucrats lost money and squandered tax dollars, hard-working private owners now make profits and create new jobs. Why can’t we do the same thing in America?

Military expenses are over $250 billion a year! A large percentage of this is spent overseas to defend wealthy countries like Germany and Japan — who then wallop us in international trade. Let’s take them off military welfare. We can defend America better and save at least $100 billion a year in taxes.

No one has the right to cover his losses at taxpayer expense — and yet wealthy corporations demand exactly that. The federal government has bailed out railroads, banks, and other corporations with your tax dollars. This must stop!

The bulk of your welfare tax dollars goes to pay the handsome salaries of well-educated welfare workers. The poor get little from government welfare except meager handouts and a cycle of despair. Let’s get government out of the charity business. Private charities and groups do a better and more efficient job of helping the truly needy get back on their feet.

Why An Income Tax?

Before 1913, federal income taxes were rare and short-lived. America became the most prosperous nation on earth. The U.S. Government did not try to police the world or play “nanny” to everyone from cradle to grave. People took responsibility for themselves, their families, and their communities. That is how the founders of America thought it should be. And it worked. It can again!

Will Taxing the Rich Fix the Deficit?