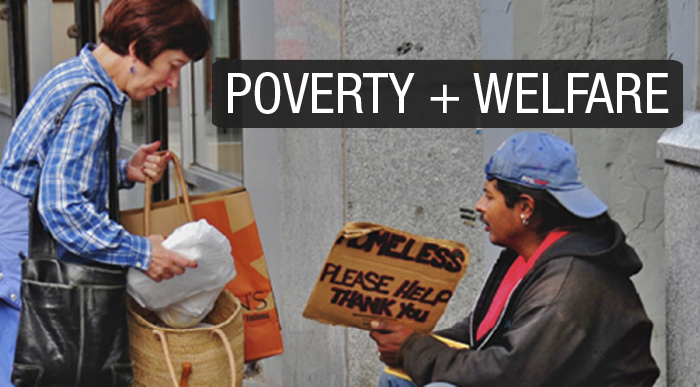 From across the political and ideological spectrum, there is now almost universal acknowledgement that the American social welfare system has been a failure.

Since the start of the “war on poverty” in 1965, the United States has spent more than $5 trillion trying to ease the plight of the poor. What we have received for this massive investment is — primarily — more poverty.

Our welfare system is unfair to everyone: to taxpayers who must pick up the bill for failed programs; to society, whose mediating institutions of community, church and family are increasingly pushed aside; and most of all to the poor themselves, who are trapped in a system that destroys opportunity for themselves and hope for their children.

The Libertarian Party believes it is time for a new approach to fighting poverty. It is a program based on opportunity, work, and individual responsibility.

None of the proposals currently being advanced by either conservatives or liberals is likely to fix the fundamental problems with our welfare system. Current proposals for welfare reform, including block grants, job training, and “workfare” represent mere tinkering with a failed system.

It is time to recognize that welfare cannot be reformed: it should be ended.

We should eliminate the entire social welfare system. This includes eliminating food stamps, subsidized housing, and all the rest. Individuals who are unable to fully support themselves and their families through the job market must, once again, learn to rely on supportive family, church, community, or private charity to bridge the gap.

2. Establish a dollar-for-dollar tax credit for contributions to private charity

If the federal government’s attempt at charity has been a dismal failure, private efforts have been much more successful. America is the most generous nation on earth. We already contribute more than $125 billion annually to charity. However, as we phase out inefficient government welfare, private charities must be able to step up and fill the void.

To help facilitate this transfer of responsibility from government welfare to private charity, the federal government should offer a dollar-for-dollar tax credit for contributions to private charities that provide social-welfare services. That is to say, if an individual gives a dollar to charity, he should be able to reduce his tax liability by a dollar.

3. Tear down barriers to entrepreneurship and economic growth

Almost everyone agrees that a job is better than any welfare program. Yet for years this country has pursued tax and regulatory policies that seem perversely designed to discourage economic growth and reduce entrepreneurial opportunities. Someone starting a business today needs a battery of lawyers just to comply with the myriad of government regulations from a virtual alphabet soup of government agencies: OSHA, EPA, FTC, CPSC, etc. Zoning and occupational licensing laws are particularly damaging to the type of small businesses that may help people work their way out of poverty.

There can be no serious attempt to solve the problem of poverty in America without addressing our failed government-run school system. Nearly forty years after Brown vs. Board of Education, America’s schools are becoming increasingly segregated, not on the basis of race, but on income. Wealthy and middle class parents are able to send their children to private schools, or at least move to a district with better public schools. Poor families are trapped — forced to send their children to a public school system that fails to educate.

It is time to break up the public education monopoly and give all parents the right to decide what school their children will attend. It is essential to restore choice and the discipline of the marketplace to education. Only a free market in education will provide the improvement in education necessary to enable millions of Americans to escape poverty.

We should not pretend that reforming our welfare system will be easy or painless. In particular it will be difficult for those people who currently use welfare the way it was intended — as a temporary support mechanism during hard times. However, these people remain on welfare for short periods of time. A compassionate society will find other ways to help people who need temporary assistance. But our current government-run welfare system is costly to taxpayers and cruel to the children born into a cycle of welfare dependency and hopelessness.

Working More to Earn Less | Why the Poor Stay Poor